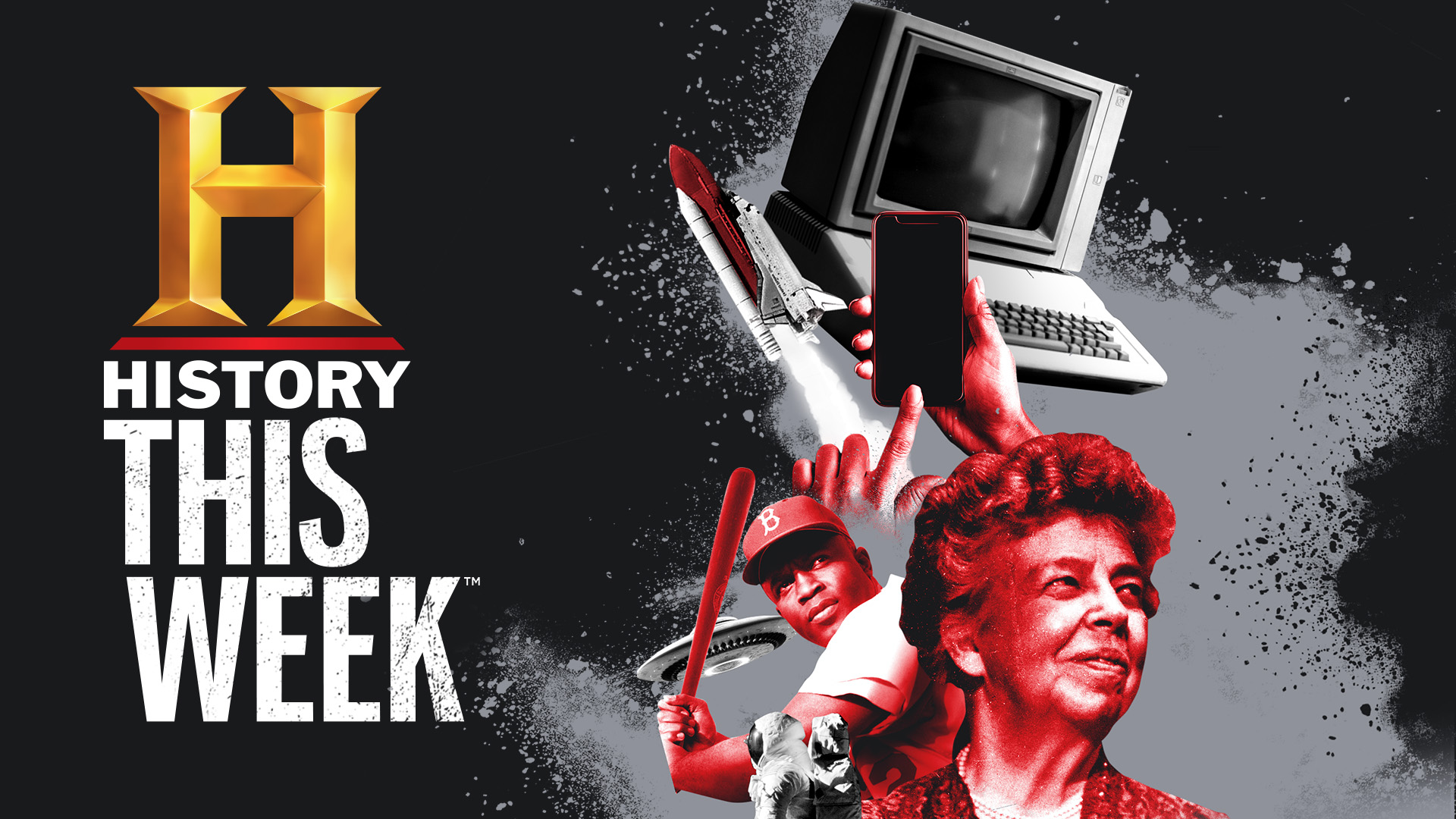 This week, something momentous happened. Whether or not it made the textbooks, it most certainly made history. Join the HISTORY This Week podcast as we turn back the clock to meet the people, visit the places and witness the moments that led us to where we are today.

To Fight a Virus, and Win

May 14, 1796. Edward Jenner puts a theory to the test: can contracting one disease save you from another? Jenner goes down in history as the man who brought us one of the greatest advances in modern medicine: the vaccine. Its discovery led to the eradication of smallpox, a virus that killed an estimated 300 million people in the 20th century alone and one of two diseases to ever be defeated. But the story of that first vaccine begins long before Jenner was even born. How did an unlikely trio in Colonial America pave the way for Jenner’s life-saving innovation? And how did a strange sequence of events help us defeat one of the oldest and deadliest diseases in human history?

May 7, 1824. One of the great musical icons in history, Ludwig Van Beethoven, steps onto stage at the K?rntnertor Theater in Vienna. The audience is electric, buzzing with anticipation for a brand new symphony from the legendary composer. But there’s a rumor on their minds, something only a few know for certain... that Beethoven is deaf. He is about to conduct the debut of his Ninth Symphony—featuring the now-famous ‘Ode to Joy’—yet Beethoven can barely hear a thing. How was it possible for him to conduct? And more importantly, how could he have composed one of the greatest works in the history of classical music?

Audio from Beethoven’s Ninth Symphony is provided courtesy of the Chicago Symphony Orchestra and Chorus and Riccardo Muti Music.

The Hunt for the Hunley

May 3, 1995. The Hunley has been missing for over 100 years. This Civil War submarine and all eight of her crew disappeared after completing the first successful submarine attack ever. When a team of divers finally locates the wreck in the mid-'90s, it seems the mystery has been solved, but what they find is more perplexing than the sub’s disappearance. The boat is undamaged, and the crew is still at their battle stations. What sank the Hunley? And why didn’t her crew try to escape?

When the Environment United Us

April 22, 1970. Nearly 20 million Americans come out in solidarity for one of the largest mass movements of the century. It was called Earth Day. And 50 years later, we still celebrate this day. But in 1970, this call to action crossed the aisle and brought major change to Washington, a feat that seems almost impossible today. Why did that first-ever Earth Day bring such a huge number of Americans—from across the political spectrum—out into the streets? And what might it take to unite the country again?

"Houston We've Had a Problem"

April 14, 1970. Apollo 13 is a quarter-million miles from Earth, speeding towards the Moon when a sudden explosion rocks the ship. Against all odds, the astronauts pull off one of the most remarkable survival missions in NASA history. On the 50th anniversary of this harrowing flight, Apollo 13 Commander Jim Lovell explains exactly what it took to save his spaceship.

The First Flight Around the World

April 6, 1924. Four planes rest in the water, preparing for take-off. At 8:30 AM, they pick up speed and hit the air. Eight pilots have begun a dangerous mission: to be the first to fly around the world. This will change our future in a way that few could see in 1924. What did it take to complete this historic flight? And, when this new technology went global, what were the unintended consequences?

The Deadliest Pandemic in Modern History

April 5, 1918. The first mention of a new influenza outbreak in Kansas appears in a public health report. That strain, later called the Spanish Flu, would go on to kill at least 50 million people worldwide. In a time before widespread global travel, how did this disease spread so far, so fast? And what does it teach us about fighting pandemics today?

March 28, 1939. Two teams are facing off for the final game of World Professional Basketball Tournament in Chicago, the first professional tournament to feature both white and black basketball teams. This is several years before the start of the NBA, and Jim Crow segregation was still the law of the land in many parts of the country. The New York Rens, an all-black team, have made it to this championship, but their road to the top was anything but easy. Who were the Rens? And how did they fight segregation and change the history of basketball?

March 19, 1931. Las Vegas is a small,?desert?town of a few thousand. And it’s not doing so well. In fact, people are worried it might turn into a ghost town. But then something big happens: Nevada decides to legalize gambling. And the ground?begins?to shift beneath?the?city...but no one notices, at least not at first. So, how did Vegas become Vegas?

The Real Assassination of Caesar

The Ides of March, 44 BC. Ancient Rome’s most powerful dictator, Julius Caesar, is running late to a senate meeting. When he arrives, senators surround him and stab him 23 times. The assassination of Caesar has been told and re-told for centuries, but the facts are wilder than the legend. What really happened on the Ides of March? And why do we tell this story over and over?

Lionel, Stevie and Tina Walk into a Studio…

March 7th, 1985. “We Are the World” hits the shelves. It's an instant hit, breaking the top of the charts and making music history. This one song has the star power of 45 of the biggest singers of the era: Lionel Richie, Stevie Wonder, Tina Turner, Michael Jackson, Diana Ross, Bruce Springsteen, Bob Dylan - just to name a few. And with their power combined, the song raised millions of dollars to help combat a devastating famine in Ethiopia and Sudan. What did it take to bring all these icons together, and did this song actually make a difference?

February 28, 1953. Two scientists, James Watson and Francis Crick, burst into a bar and exclaim that they have discovered the secret of life. But there was another person involved in the discovery of DNA’s double helix, a scientist named Rosalind Franklin. Why didn’t she get any credit, and what does her story tell us about the politics of discovery itself?

A Mole in the CIA

February 21, 1994. Early in the morning, FBI agents assemble near the home of Aldrich Ames. They wait for him to leave his house and then they pounce, arresting one of the deadliest double agents in CIA history. He received almost $2 million from the KGB, selling CIA secrets and lethally betraying undercover agents for years. Who is the real Aldrich Ames? And why does a spy turn on their own country?

The Legacy of an Oscar

February 11, 1940. Hattie McDaniel becomes the first-ever African American to be nominated for, and then win, an Oscar. Her legacy is complicated. And the Oscar itself has been missing, mysteriously, for almost fifty years. What did it take for McDaniel to win? And, 80 Oscar ceremonies later, how do we understand her legacy today?

When Black Men Won the Vote

February 3, 1870. The 15th Amendment is ratified, which establishes the right to vote for black men in America. While Jim Crow laws would grip the south by 1877, there was a brief, seven-year window of opportunity. Half a million black voters turned out at the polls, and 2,000 black officials are estimated to have been elected during this time. What did this moment of progress look like? And how do those votes still impact our lives 150 years later?

January 27, 1945. This week, we commemorate the 75th Anniversary of the liberation of Auschwitz, one of Nazi Germany's largest concentration and extermination camps. Auschwitz has since become a symbol for the Holocaust itself, but what did liberation actually mean for its survivors - and is the full story being forgotten?

The Apple Ad That Changed the World

January 22, 1984. Apple launches the first Macintosh computer, with a showstopping Super Bowl commercial. The ad itself was revolutionary, but the product it launched almost single-handedly brought computers into the mainstream, changing the world as we know it.

January 15, 1919. Boston PD receives a call: “Send all available rescue personnel...there's a wave of molasses coming down Commercial Street." The bizarre flood decimated Boston's North End. How did it happen? And why does it still affect us all today?

Warning: The Surgeon General Has Determined...

January 11th, 1964. The US Surgeon General announces: smoking is killing us. It’s an announcement that changed the course of American public health – and took years to finally come out. But it was only the beginning of an uphill battle to take down an all-American pastime. This week we ask: why did it take so long for the public to learn this deadly truth? And why has it taken even longer for us to accept it?

This week, something momentous happened. Whether or not it made the textbooks, it most certainly made history. Join HISTORY This Week as we turn back the clock to meet the people, visit the places and witness the moments that led us to where we are today.

Apple Spotify Stitcher
The Apple logo, iPhone, iPod touch, and iTunes are trademarks of Apple Inc., registered in the U.S. and other countries..
By submitting your information, you agree to receive emails from HISTORY and A+E Networks. You can opt out at any time. More details:

How can we improve this experience?

Create a Profile to Add this show to your list!